Anti-Social is the amazing app that makes it easy for you to target and block any distracting website so you can be more productive.

Need to block a site that distracts you? Just add it to Anti-Social's block list and it disappears.

Anti-Social is more than a browser plug-in, blocking distracting sites across your computer's browser and clients.

You can set Anti-Social blocks for as little as 15 minutes, or as many as 8 hours. That equals lots of productivity.

An absolutely invaluable tool for students and workers with non-traditional office setups. Loved by stay-at-home moms and dads.

With the release of OS X Yosemite, we're thrilled to introduce Anti-Social 1.0. Anti-Social 1.0 is a major upgrade, completely rewritten, and has a great new interface. We know you'll love it. With Anti-Social, you’ll be amazed how much you get done when you turn off your friends.

Anti-Social was developed to fight digital distraction. The first software we created to fight distraction, Freedom, is used by hundreds of thousands of people and has drawn praise from the media and tech luminaries. Freedom works by locking you completely offline – a sure way to beat distraction, but often challenging for individuals who need to be online as they work.

Anti-Social is built to solve this problem. It uses the same mechanisms as Freedom, which means you can trust it is completely safe to run. Anti-Social makes no permanent changes to your computer, and if you need to get back on the social web before time elapses, just reboot your computer and run Anti-Social for 10 minutes. The increased productivity you’ll experience when you run Anti-Social provides a strong psychological barrier against cheating.

The trial version of Anti-Social 1.0 is fully functional, but can only be run a limited number of times. Try it out when you’re working on your next article, paper, or design project. You can easily convert the trial version to a registered version.

Q: I ran an old version of Anti-Social on Yosemite/El Capitan - my blocks won't come out!
A: First, we are very sorry about this! Anti-Social 0.2-0.7 could not be made compatible with Yosemite, so we discontinued 0.1-0.7 in late 2013, and we sent a number of notification emails out to our users upon the launch of Yosemite. If you're having problems, we've built a little tool called Block Remover that will remove the blocks. Just download and run Block Remover and you'll be good to go. Because of Yosemite's many changes, we had to rewrite Anti-Social from scratch - our new version 1.0 is fantastic and compatible with Yosemite and El Capitan.

Q: How does Anti-Social work, and is it safe?
A: Anti-Social works by disabling your a number of social sites for the time period you specify. When you run Anti-Social, you’re not able to get to these sites, so you’re forced to get work done. Anti-Social is completely safe because it makes no permanent changes to your computer. If you need to get back online, just reboot and run Anti-Social for a few minutes - the blocks will clear.

Q: How does Anti-Social count down time?
A: To ensure you're productive, Anti-Social only counts down “active minutes.” That is, if you set Anti-Social for 20 minutes, put your computer to sleep 10 minutes into Anti-Social, you’ll have 10 minutes of Anti-Social left when you come back. 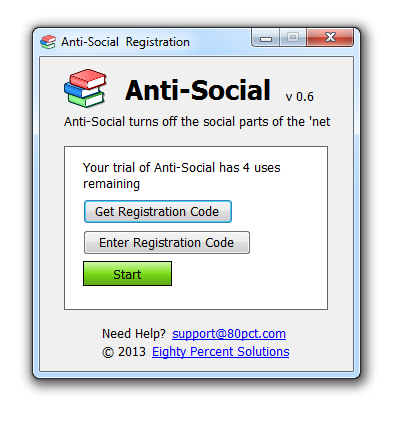 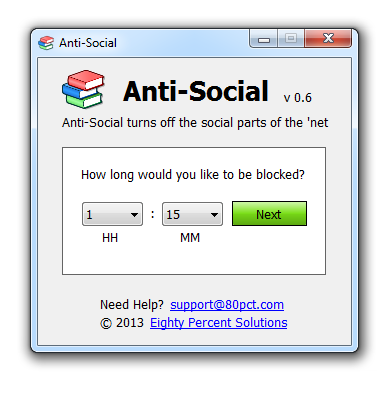 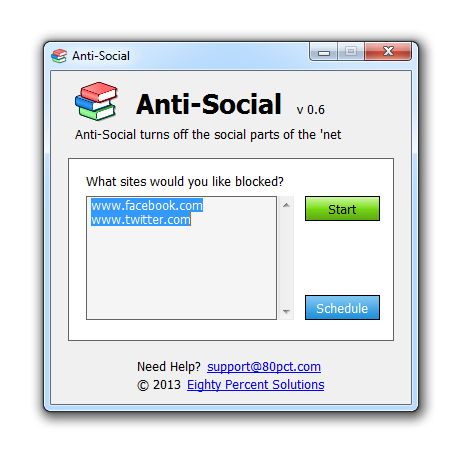 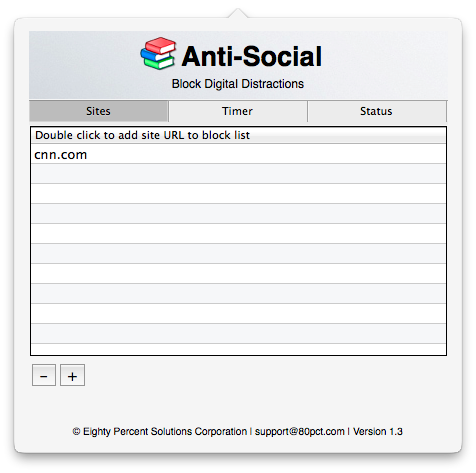 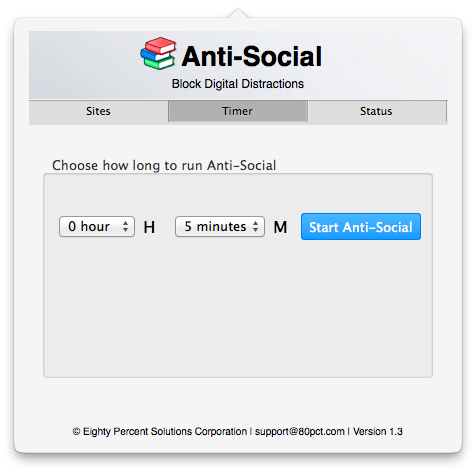 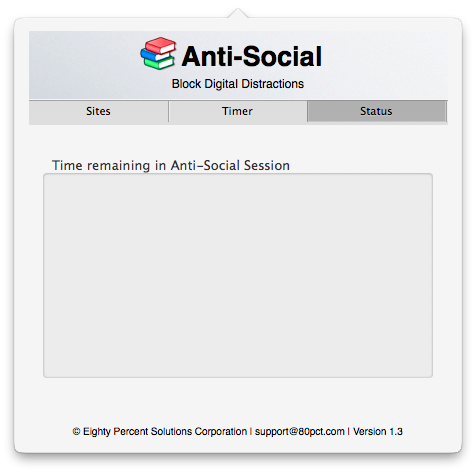 Thank you for giving the gift of Anti-Social this holiday season! Loved by hundreds of thousands of people, our software makes for a truly unique and inspiring gift. And, as always, it comes with our money-back satisfaction guarantee.

More info: To give a gift, please fill out and submit the form. Your order will be processed securely through PayPal, and you'll be sent a confirmation receipt. The only required information is the recipient's email address (you can give anonymously if you wish), and you can choose to add your name, a personalized message, and a custom delivery date. The recipient will be sent a personalized gift order. If you do not select a delivery date, the gift will be delivered immediately. If you have any questions, please contact us at support@80pct.com

Mac: After you purchase Anti-Social, you will be sent an email with your registration code, and a link to download the software. The software will come packaged as a .dmg file. Once downloaded, simply double click the .dmg file, which will open a new finder window. Then drag Antisocial.app to your Applications folder (and your Dock if you'd like).

Windows: After you purchase Anti-Social, you will be sent an email with your registration code, and a link to download the software. The software will come packaged as a .exe file. Once downloaded, simply double click the .exe file, which will guide you through a Windows installer. Enter your code when prompted.

If you run into any problems or need help, your purchase is fully supported. Please email support@80pct.com. The first time Anti-Social runs, it takes a few minutes to put all the blocks in place. Please be patient and test after 3-5 minutes or so.

Anti-Social isn't available on the Mac app store due to Apple policies forbidding software that blocks websites. When these policies change we'll add Anti-Social to the app store. Thank you for your support, which makes continued development possible.